CryptoCompare releases its cryptocurrency exchange report, which standards have been changed a great deal since the first rankings report released in June 2019, so there’re quite a few surprises.

In what seems to be a weird turn of events, top cryptocurrency data and assessment firm CryptoCompare has released its data for cryptocurrency exchange rankings and there are a few surprises in its benchmark report.

Firstly, Binance has been dropped from its top ten rankings which comes as a shock as it is currently in the top three cryptocurrency exchanges in terms of the trading volume.

Secondly, most of the popular cryptocurrency exchanges didn’t receive the expected rankings as only Coinbase made it to the top three with Winklevoss-backed Gemini taking the top spot. 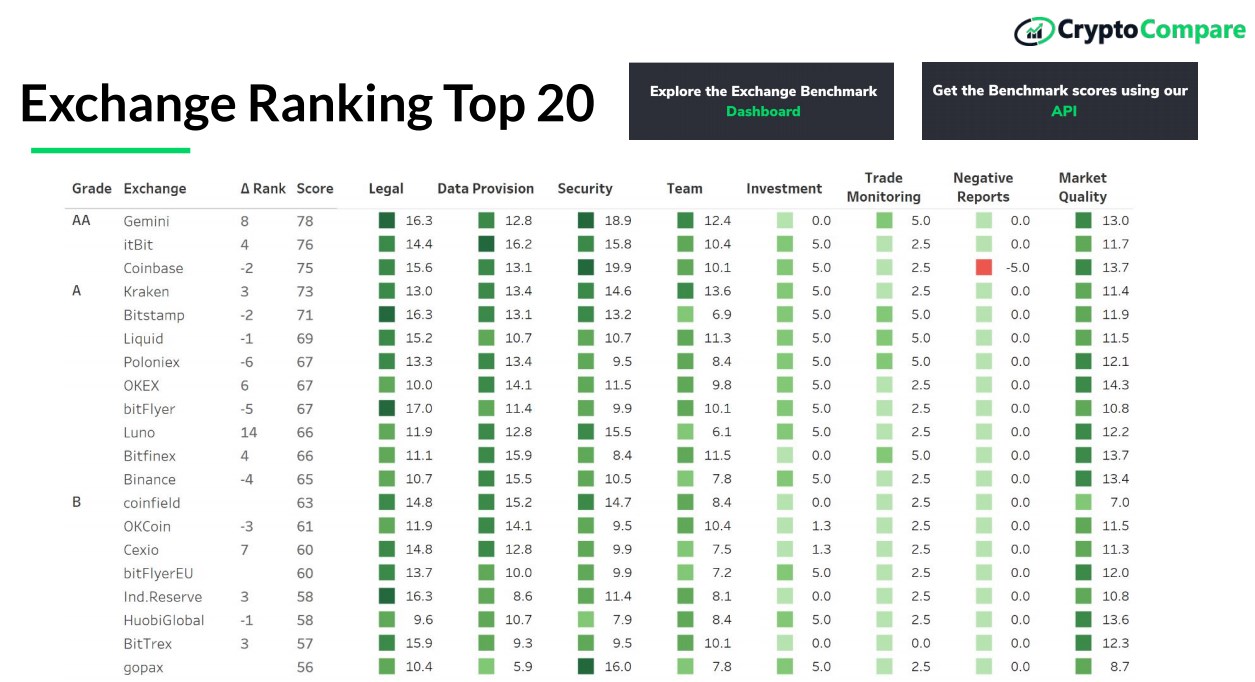 Binance failed to make the top ten cut of top-tier cryptocurrencies on the CyrptoCompare list due to the recent hack where about 7,000 Bitcoins were stolen in May this year. CryptoCompare takes the issues of security breaches quite seriously as security is one of the top-ranking factors for the emergence of cryptocurrency exchanges at the top. As such, Binance lost out bit time on the list and wasn’t featured in this round.

This comes as a shock as the second-largest cryptocurrency exchange by volume had already implemented measures to ensure that users’ funds were secured as its secure asset funds covered users’ accounts and wallets that had issues. Binance made 12th place on the list indicating how serious CryptoCompare takes security as a ranking factor.

While it looks like a palace coup of sorts, the most popular cryptocurrency exchanges weren’t at the top this time. The following made the cut of the top ten: Gemini, Paxos’ itBit, Coinbase, Kraken, Bitstamp, Liquid, OKEx, Poloniex, bitFlyer, and Bitfinex. This is indicative of the new changes that CyrptoCompare is making as regards the rankings.

Under further study of the spread in the rankings report, indications have emerged that while top-tier jurisdictions such as the United States, Luxembourg, Japan, and South Korea still stood their ground as regards the locations of the cryptocurrency exchanges, other jurisdictions such as Australia, Malta, Seychelles and Singapore are also emerging locations for Cryptocurrencies with standards of excellence that are at par with the former locations this informed of new members that were added to the list.

CryptoCompare’s standards have changed a great deal since the first rankings report that was released in June this year.

This time, their methodology was based on several factors such as a new security category which changed everything, key management positions such as the position of the Chief Compliance Officer (CCO), Chief Information Security Officer (CISO) and others were given more consideration based also on experience, geography as regards jurisdiction of registration and operations of the cryptocurrency exchanges.

They also added data on insurance cover in case of the occurrence of high-risk situations, on-chain transaction monitoring to reduce the incidence of fraud, data provision ratings, negative reports in terms of user experience and the inclusion of other markets which weren’t covered the last time. This has given rise to a more comprehensive vetting process which has created a new set of standards.

This, of course, means that this form of self-assessment of the crypto space is just the beginning of greater things to come as this ranking places emphasis on fundamentals which will go a long way in ensuring greater adoption by the general public.

Coinbase said that its users will be easily able to move assets across Solana and Polygon at less gas costs, just by funding their wallets on these blockchain networks.

The first NFT collection of Ronaldo will start selling on Binance later this year.