Facebook Inc. is trying to get in the game of online payment systems like PayPal or Venmo by introducing a free friend-to-friend service of its own, the company announced today.

When you chat with your friend about splitting the bill, the popular social network doesn’t want you to have to open another app like PayPal or Venmo to send them money.

“Today we’re adding a new feature in Messenger that gives people a more convenient and secure way to send or receive money between friends. This feature will be rolling out over the coming months in the US,” the company announced on its blog.

So, today Facebook announced that it launches a new payments feature for its Messenger that lets userst connect their Visa or Mastercard debit card and tap a “$” button to send friends money on iOS, Android, and desktop with zero fees.

“When they tap it, Facebook will ask them to enter their debit card info. Users won’t have to fiddle with finding and entering bank account and routing info, making it easier than some alternatives, but they can only use Visa and Mastercard debit cards. 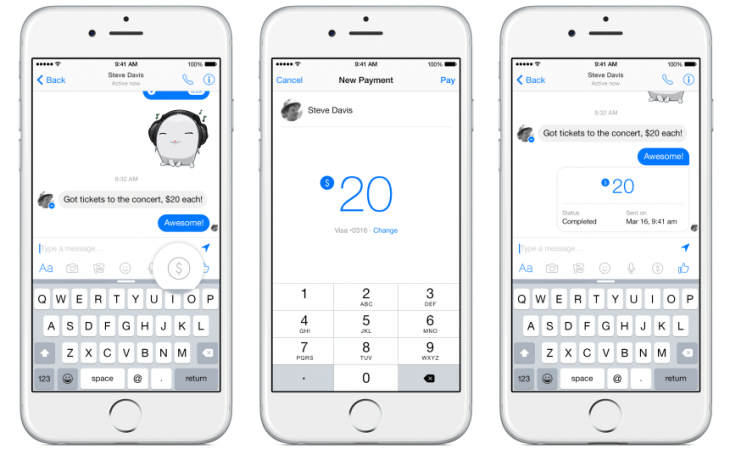 Facebook decided against allowing credit cards because they would entail fees and it didn’t want users to get charged if they didn’t understand,” Tech Crunch explains.

For further security, facebook lovers are asked to enter in-app payments passcode or Apple TouchID fingerprint to confirm the operation, though they can opt out of this extra authentication in the settings. If a card has a debit with Facebook from activities, users can use that, too.

Once the $ button is tapped, users enter the amount of money they want to tranfer and hit Pay. Dollars is instantly taken from their debit account and delivered to the recipient’s debit account.

However, Facebook warns: “The money you send is transferred right away. It may take one to three business days to make the money available to you depending on your bank, just as it does with other deposits.”

Meanwhile, experts believe that persuading Facebook users to share their payment information also opens the doors for potential revenue-generating opportunities down the road.

“If Facebook gets a ton of credit card and payment details, and if consumers could complete transactions for physical goods on Facebook, and if Facebook actually chooses to do so in meaningful ways, they would be able to better target buyers, which could raise their advertising rates,” said Forrester Research Vice President Sucharita Mulpuru, conceding those are a lot of ifs.

“It’s obviously not a feature you’re going to use 10 times a day,” says Facebook’s product manager on the feature Steve Davis. “But when you do need to send money, this is probably going to be the best way to do it.”

There’s also a possibility that once Facebook will look at using Bitcoin payments during transfers. Thus, Paypal works with Bitcoin via its subsidiary BrainTree. The integration with CoinBase was announced back in September 2014 and was followed by PayPal’s limitations regarding its merchants.

On January 22, 2015 the company wrote in their blog: “Today, our initial integration with Coinbase is complete and we are opening up private beta access to allow merchants in the US to accept bitcoin via v.Zero.”

Being the main author of TheBlogIsMine news portal in the past, Anastasia has significant experience in observing such fields as tech and business. Now she wants to explore a new area – FinTech. Passionate researcher on technology topics eager to know about what's shaping the future – and how to respond.

CEO of Meta, Mark Zuckerberg, has unveiled several uncompleted metaverse headsets being built in its lab.

With the Meta Platforms ticker symbol change, the company can now be better tagged to embodying the metaverse it seeks to pioneer.